Originally written in the mid-1950s, Go Set a Watchman was the novel Harper Lee first submitted to her publishers before To Kill a Mockingbird. Assumed to have been lost, the manuscript was discovered in late 2014.

Go Set a Watchman features many of the characters from To Kill a Mockingbird some twenty years later. Returning home to Maycomb to visit her father, Jean Louise Finch—Scout—struggles with issues both personal and political, involving Atticus, society, and the small Alabama town that shaped her.

Exploring how the characters from To Kill a Mockingbird are adjusting to the turbulent events transforming mid-1950s America, Go Set a Watchman casts a fascinating new light on Harper Lee’s enduring classic. Moving, funny and compelling, it stands as a magnificent novel in its own right.

I’ve read a lot of reviews where people are either enraged over the content of Harper Lee’s sequel, angered about how the book even came about to being published, or delighted that there is a sequel to be published in the first place and giving it rave reviews. When I was reading Go Set a Watchman, however, I didn’t really fall into any of these categories.

You know what I felt? I felt sad. I felt sad the entire time I was reading it. It was like we were given this book, but something was also being taken away. I kept thinking about To Kill a Mockingbird (obviously since this is its sequel) and while I did read that when I was younger (my freshman year of high school, so about 6 years ago) I felt that the nostalgia of that book was taken away with the addition of this one. I couldn’t shake the feeling of being so tremendously sad. 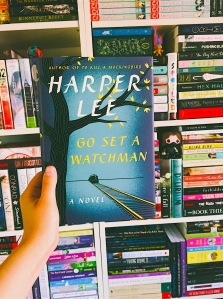 That being said, I couldn’t put the book down either. Once I fell into it, I would resurface an hour or so later having read 50 or so pages and in this strange state of melancholy. Maybe it’s because of the way Scout/Jean Louise talks about her town, herself, and her father that she too, is seeing everything from a different perspective. She’s not a child anymore; she’s a young woman who is coming home to a rude awakening, so to speak.

Think about her name itself; Jean Louise. No one calls her Scout anymore (only her father and that’s pretty rare). The loss of her childhood nickname truly showed, to me, how much things have changed for her. Additionally, and by now I think a lot of people know this, when Jean Louise see’s her father at a community meeting (basically a KKK meeting) she is absolutely stunned and horrified. So much so, that she literally throws up from the horror of it. She is seeing her father in unaltered way. In other words, not through the lens of a child. Atticus is not the hero anymore; he has become a man and a regular human to Jean Louise. And I think this is why so many people were upset about it too; because we saw everything the way that Scout did and now we’re seeing everything the way that Jean Louise is seeing it, and it makes us sad, angry, etc.

To take something like To Kill a Mockingbird and turn its entire racial and social premise on its head through one 258 page novel is amazing. And that’s exactly what Go Set a Watchman did and it’s compelling, maddening, and depressing. Did Go Set a Watchman change my opinion of its characters? Yes; I’d be stupid not to think that. Do I still think To Kill a Mockingbird is still one of the greatest novels I have ever had the privilege of reading? Yes, because it is a privilege. It’s a privilege that we, as readers, are overlooking that we even have the ability to read both novels and analyze them (considering Go Set a Watchman was locked away for so many years for a reason).

At the end of the day, I still love To Kill a Mockingbird and I really like Go Set a Watchman. I think they both have their merits and faults, but Harper Lee created this world that would have never existed otherwise, and has given life to real characters. Characters that are not perfect, don’t fit into any specific mold, and go through very real, complex, circumstances, making them more like us than we realize. As Jean Louise puts it, we’re all seeing them as human now.

Here’s a Tweet, because I forgot to talk about Boo. But seriously, why was he not even mentioned once??

I forgot to talk about one thing in my #GSAW review: WHERE IS BOO RADLEY. IS HE OKAY!? DOES HE HAVE A BLANKET!? IS HE WARM!? #harperhelpus

2 thoughts on “Go Set a Watchman by Harper Lee”